On Joel’s birthday eve, his treat was a hospital visit. For once, it was prearranged and not an emergency dash to casualty and it was all because of a sore/enlarged/noisy knee. He’s a hypochondriac at the best of times and the fact that the physio was unable to diagnose his problem and has referred him elsewhere (not to a psychiatrist as I had hoped) has only heightened his medical paranoia!

He had been pleased two weeks earlier to be labelled with a syndrome. Something called Osgood Schlatter disease. Especially good as no-one had heard of it so it sounded tremendously serious and people were scared to ask what it entailed in case it was infectious or terminal! From what I gather, part of his knee has grown quicker than another part. Like his skull grew quicker than his brain, thus creating a redundant vacuum that has yet to be filled completely with some form of intelligence! 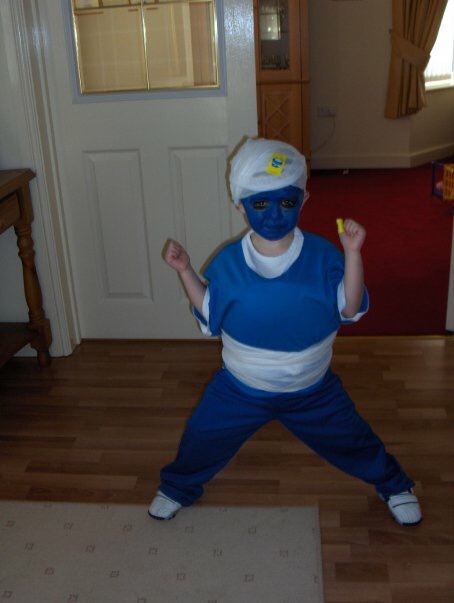 I was warned early on that such problems would arise with Joel. Of my three births, his was the most difficult. He wasn’t that fussed about exiting my nether region, but when he did reckon it was the right thing to do, he decided to do it at speed, pretty much like he manoeuvred constantly as a toddler, much to my frustration. However, he didn’t rid himself of the cord wrapped round his neck before venturing into the outside world, so he necessitated some medical intervention. I was, ahem, cut, the ventouse was located and staff were ready in position but then out he popped. No need for the episiotomy. No need for doctors to be hastily summoned. No need for medical students to be dragged away from their cup of tea and Jeremy Kyle. And to this day, Joel will ask a question, give you two seconds to contemplate then walk out of a room without hearing the answer. Demands advice then doesn’t want it. Pretty much summing up his entrance to the world.

Despite being an easy baby, lulling me into a false sense of security, he required trips to the hospital. Being extremely chilled, at some point he forgot that his head could turn both ways and he permanently looked to his left. No amount of talking to his left would make him look this way. You would stand to one side of him and call his name, but he would just grin aimlessly without making eye contact. It turned out his right neck muscles had tightened through lack of use. Lack of use?! He was four months only, not forty years old!! At some point he started looking the other way, too late though to prevent a dent from developing on the left side of his head where he permanently looked when lying! Cue purchase of strange shaped pillow to sort this problem out.

He also developed a hernia. Common apparently, but again the only one of my babies to do so. It didn’t concern him in the slightest, this alien like bulge protruding from his stomach. Again, something else which just went away by its own accord, to be replaced by the next thing.

So once he’d stopped being scared of turning left and his strange looking protrusion disappeared, it was time for the next complaint to manifest itself. Joel had since become the laziest baby ever. You had to wake him up from naps. You had to engage with him because he was just completely apathetic. And this included talking. So the next stop was the speech therapist. At the age of two he was still unable to string two words together, never mind a sentence. I lost count of the times I would show him a red car.

“What colour is it?”

“Yes but what kind?”

“Say them both together”

I left it to the pre-school staff to sort that out before I was up on a murder charge.

Joel would call his next ailment ‘Spitter’. This was a delightful condition where he would just randomly regurgitate food. Not after every meal. Not after vigorous exercise. Just randomly. Sometimes it would escape onto his top. Sometimes he would contain it in his mouth but then delight in showing me the contents. Another trip to the doctor. Something else he would grow out of.

He is the only one of my children to not catch chickenpox. He has lived within inches off this childhood disease. He bathed with his brother when Sam was contagious. He cuddled his sister, probably even licked her face too! Yet, he didn’t catch it. Probably because it was a normal infant illness and we all know Joel has never been normal.

Joel is also the only one of my children whom I have had to take to casualty. A lot. He is the child I have taken most to the doctors. A lot. On the last day of Year 3 he split his chin open falling over in the playground. Two hours later, we were back at the hospital to replace the glue he’d picked off. Back again when pasta sauce was spilt on his hand. Back again when he failed to catch a rugby ball properly and bent back his thumb. Whilst he was concerned about whether he would be able to write (concerned as in hoping he couldn’t), I was more worried that a doctor would start adding up the number of hospital visits we had undertaken in his relatively short lifespan and start hunting out the number for social services! 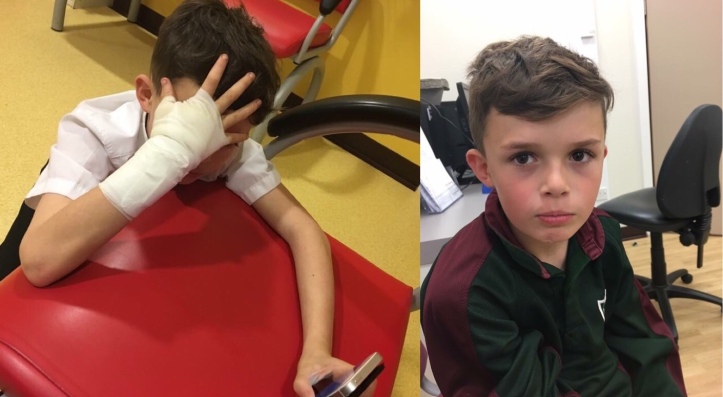 So while he delights in his ‘clicky’ knee and the fact he has been referred, this holiday has thrown up other complaints. Alien object in eye, a toe which feels funny, strange shaped nail and a pretty normal headache. God help me when puberty strikes!

Postscript: Just been informed by Joel that the toe is in fact broken. Absolutely, definitely broken.