Rolling Back the Years 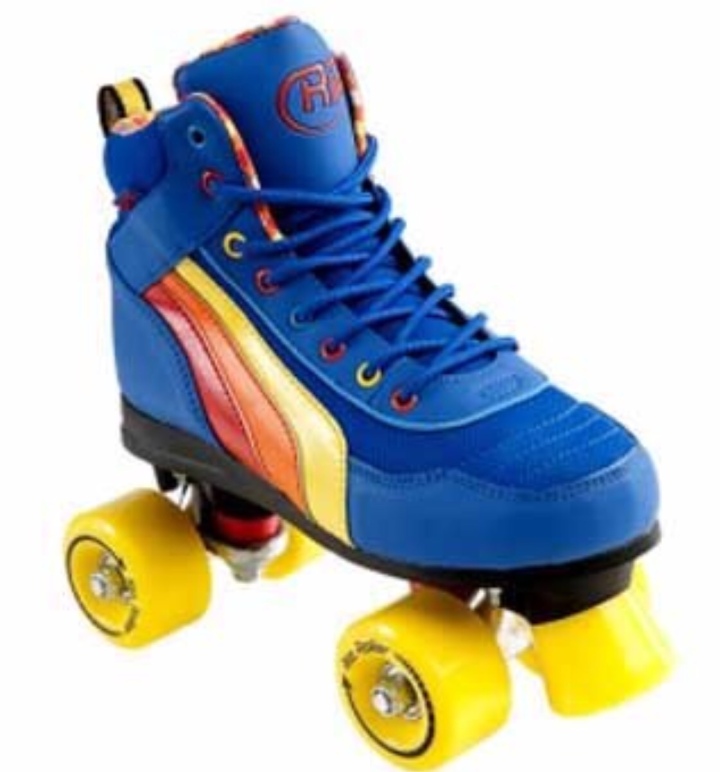 I was 45 today. I was given a new phone so I can take 3000 new photos of the kids, Frankie and Scentsy warmers but never actually print them out. I received some lovely perfume for me to wear when I never go out! And the kids are old enough now to know it’s much safer to forage in the cupboards than to ask me to prepare a meal, nutritious or otherwise (Edit: Abigail attempted to ask for breakfast at lunchtime and has now learnt not to do that ever again on 7th August!) That is generally how birthdays are now. But today I’ve been remembering how they used to be.

Travel back to this day in 1983 and I had just turned 9. And I consider this day to be one of my best birthdays ever. I’d had butterflies in my stomach for weeks approaching this day and for one reason only. Roller boots.

Back in 1983 they were all the rage. However, as an August born, most of my peers had worn down the stoppers on their Mark Taylor purchased boots before the summer holidays (and my birthday) had even come around! I was left to try and chase after my booted friends wearing the metal death traps known as roller skates, precariously attached to my trainers with fraying leather straps and with no mechanism attached to stop the child whizzing dangerously down the hill at speed. (If I remember rightly, we would perform something similar to a snow plough turn and aim to crash into a garden wall, sometimes projecting ourselves over it!) How they ever passed any quality control or safety tests is beyond me.

So for my 9th birthday I was getting roller boots. They were actually purchased two weeks before so I could try them on and make sure they fit like a pair of Clarks’ school shoes. For the last two weeks of being 8, I lived knowing they were in the house. Inaccessible. Out of bounds. Interdit. Strictly verboten. I pleaded, begged, cried for these boots. The best I achieved was convincing my mam the day before my birthday that I needed to break them in! She placated me by allowing me to skate for 5 minutes on the living room carpet.

Then the big day arrived. I don’t remember any other presents. But by 9 o’clock, I was breakfasted, washed, dressed, coiffeured and sitting by my front door waiting for the off, like a thoroughbred race horse trapped in the starting gate at Ascot. As soon as I heard a knock at the door, I clumsily escaped from the house on my shiny eight wheels and that was me for the day. In those days, summer meant sun so I spent the next few hours skating to nowhere in particular. Just around my local roads, feeling like the king of the world, relishing in the fact that, for someone who still is vertically challenged, I was now 2 inches taller! I reluctantly returned home at some point to feed my over exerted muscles. All I required was a couple of slices of white bread, dollops of butter and a processed slice of orange rubber cheese slapped in the middle and I was off again. Eventually, as the sun set and the street lamps came on, I made my way home, having had one of the best birthdays ever. No elaborate party. No special day out. Just me, my friends and my boots.

But there was still more to come. Not long afterwards, part of a flat road on The Crest was re-covered in fresh, new, smooth tarmac. To most people on the estate this was rather insignificant. To us ‘roller booters’, it was nirvana! Off we went to skate without fear of bumps, cracks, stones and any other obstacles which deferred enjoyment from our favourite pastime of the moment. We glided and spun on the black hardened nectar like Torvill and Dean. Such simple pleasures. And one of our new favourite past times was to track down freshly tarmacked roads, like an intrepid group of Nazi hunters!

My love affair with my roller boots continued throughout the summer. I forgot what my feet looked like! These rainbow embroidered extensions of my legs were even coming on holiday with me to Bournemouth so I could explore new tarmac, paths, roads, areas. The day before, we went to visit family and I insisted on travelling there by boot. This journey was all downhill and I’ve a vague recollection that it was suggested this would not be a good idea. But I could not be deterred. Off I went, gliding and turning, expertly applying my stoppers at the bottom of Balmoral Road and impatiently waiting for my mam as she travelled like a normal human by foot. The journey continued and my confidence was at an all time high. I’d spent the summer mastering these bad boys and nothing was going to stop me. As I zoomed round the corner onto Springfield Avenue, unbeknown to me, my nemesis was lying in wait. Lying patiently in ambush, a stone too large to belong on a footpath presented itself, but not in time for me to use my worn down stoppers to prevent what was about to happen. In a split second, I went from speedily skating on two legs to silently sliding on two knees and replaced rubber stoppers with flesh covered hands. This new method of travelling seemed to last forever and it was all done out of my mam’s eyesight as she was still at least five minutes behind! Normally, I would have remained on the path, sobbing hysterically, showing the whole world my ravaged hands and knees. But I knew that I shouldn’t have been on my boots. The perils had been pointed out beforehand and I had chosen to ignore them. Instead, I stood up, skated for a while then at some point turned round so the trails of blood trickling down my legs and the holes in my knees, where flesh used to be, were visible for everyone to see. Unsurprisingly my attempt at a nonchalant attitude was not matched by mother’s reaction. What did she tell me? What did she say? I should have walked. This was the holiday ruined. I thought this was a bit of an overreaction. I set off skating the 100 yards to my relatives’ house, aching, defeated, morose, like Zola Budd would do one year later at the Olympics (was I her role model?!). Fast forward one week and I was still walking like the Tin Man before Dorothy found the oil can. At every opportunity, I would sit down, in agony from the weeping wounds which did not appear to be healing. I still have the scars. And I don’t recall wearing those boots once in ten days.

I don’t remember falling out of love with my boots. I don’t know if I outgrew them physically or emotionally. They were the only pair I ever had. Like I only ever had one Tiny Tears and one Sindy. Other birthdays have come and gone, but I will never forget my 9th, back in 1983, when I spent my special day exploring the world from a higher vantage point and at a faster pace than normal. It certainly was a good day.