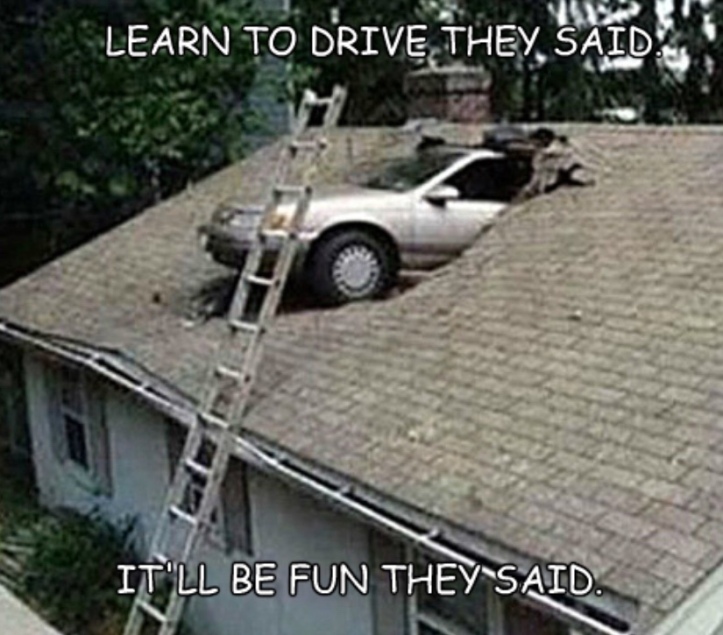 Yesterday, I was sat watching my first-born on his first driving experience. Unfazed by the seriousness of the activity. Unconcerned by the dreadful weather conditions. Unperturbed by being taught by a stranger. He hasn’t even reached the legal driving age but he is keen to become mobile, therefore independent. I’m also eager for him to pass his test as soon as possible, so he can become his sister’s own personal taxi for her countless dance lessons.

I, on the other hand, was not so keen to start learning. By the time I turned seventeen in the August, my three best friends had already obtained their licences, therefore the need for me to drive diminished rapidly. I had my own three private chauffeurs. One friend did attempt to encourage me. We sneaked to a local school car park and she bravely tried to teach me. Two bunny hops later, she yanked on the handbrake and I escaped to the passenger seat, utterly and totally relieved.

So my seventeenth birthday came and went. I resisted. I ignored parental requests. I declined polite reminders. However, in the end, lessons were booked for me and I can still remember standing at my bedroom window, waiting in dread for the white Ford Fiesta to ascend the hill so I could commence this weekly torture.

In theory, I should have been slightly prepared. Apart from those two bunny hops, my dad had taken me out a couple of times before the official commencement of my driving instruction. He was aiming to give me a helpful start. A large black Mondeo when you’re 17 (or had I managed to put it off till I was 18?) and vertically challenged was the not the best vehicle to be handling when being introduced to driving. A cushion was required so I could see over the steering wheel and the chair had been propelled so far forwards for me to reach the pedals that I was practically sitting on the dashboard. But we were on a quiet industrial estate, late in the evening. What could possibly go wrong?

“Now Lindsay,” pronounced my dad calmly, “You are now in charge of a killing machine.” Well, that’s exactly where it all went wrong. With this piece of advice firmly embedded in my mind, I spent the rest of the ‘lesson’ crawling along the deserted roads in first gear, terrified of injuring, maiming or murdering any living creature. We attempted one more lesson after that. Apparently, I wasn’t getting the ‘bite’. This vehicle had now become a killing machine with a real appetite. I was done.

Except I wasn’t. One day, I did indeed find myself standing at my bedroom window, wishing that the instructor had forgotten, crashed or had been eaten by his own killing machine. Alas, to my despair, he arrived.

I never enjoyed lessons. I’m sure part of the problem for me was the fact everyone else knew that I couldn’t drive. I couldn’t do something. The giant red L on top of the car announced to the world that I was incapable. And for someone who was confident academically, I struggled with this. If only they’d had the theory test back in my day!

Secondly, something else I found challenging was the fact that every lesson took me to Jamland. Not only was I terrified of the killing machine I was operating, I was also petrified of having to navigate unfamiliar roads which may lead into Indian territory. One inaccurate 47 point turn and the natives could have surrounded the car and be shouting some unintelligible abuse at me and my teacher!

Luckily, to my relief, university beckoned so the driving had to stop. Albeit temporarily. On each holiday home, lessons restarted. It was like I had developed amnesia through heavy alcohol consumption or breathing in whisky infused air in Edinburgh. I just didn’t appear to be making progress and I resented not being very good at it.

My new instructor (he was very cheap) hastily put me in for tests in the hope I would pass before returning to uni. And inevitably I failed. Twice. Twice unsurprised. Twice unconcerned.

So if you can’t pass a test driving the streets of a small town which you vaguely know, what do you do? Completely illogically, you start to take lessons in a capital city! Yes, maybe a change of scenery would improve things! Maybe cruising the streets of a place I loved would make a difference. Or maybe, just the thought that I was soon to graduate and had no idea where I would be working or living in the matter of months meant I just had to get this certificate once and for all.

So along came test number three. I was one month off the start of my finals. Not ideal. On the morning of the test, it was rainy and foggy. Not ideal. Finally, my examiner had the strongest dialect I’d ever heard. Not ideal. And they are my only memories. Apart from two more. I remember getting quite arsey when he was asking me questions from the Highway Code, insisting I had already given the correct response in my quaint English tones! Resigned to the fact I’d probably failed again, I was happy to disagree or argue. And my other abiding memory was that I bloody passed. I suspect to this day that the examiner fixed the result. Maybe he thought if this impudent Sassenach could legally drive, she would disappear south of Hadrian’s Wall, never to be seen again.

As it was, I did. Bribed with a car if I was awarded a 2:1, I was soon the proud owner of a Vauxhall Corsa. 3 years later than all my friends, I was finally mobile, bravely venturing back to Jamland but now inconspicuous and qualified. And on my return to Edinburgh months later, the city I loved, the place where I learned to drive, the location where I finally passed my test, I proceeded to drive the wrong way up a one way street!