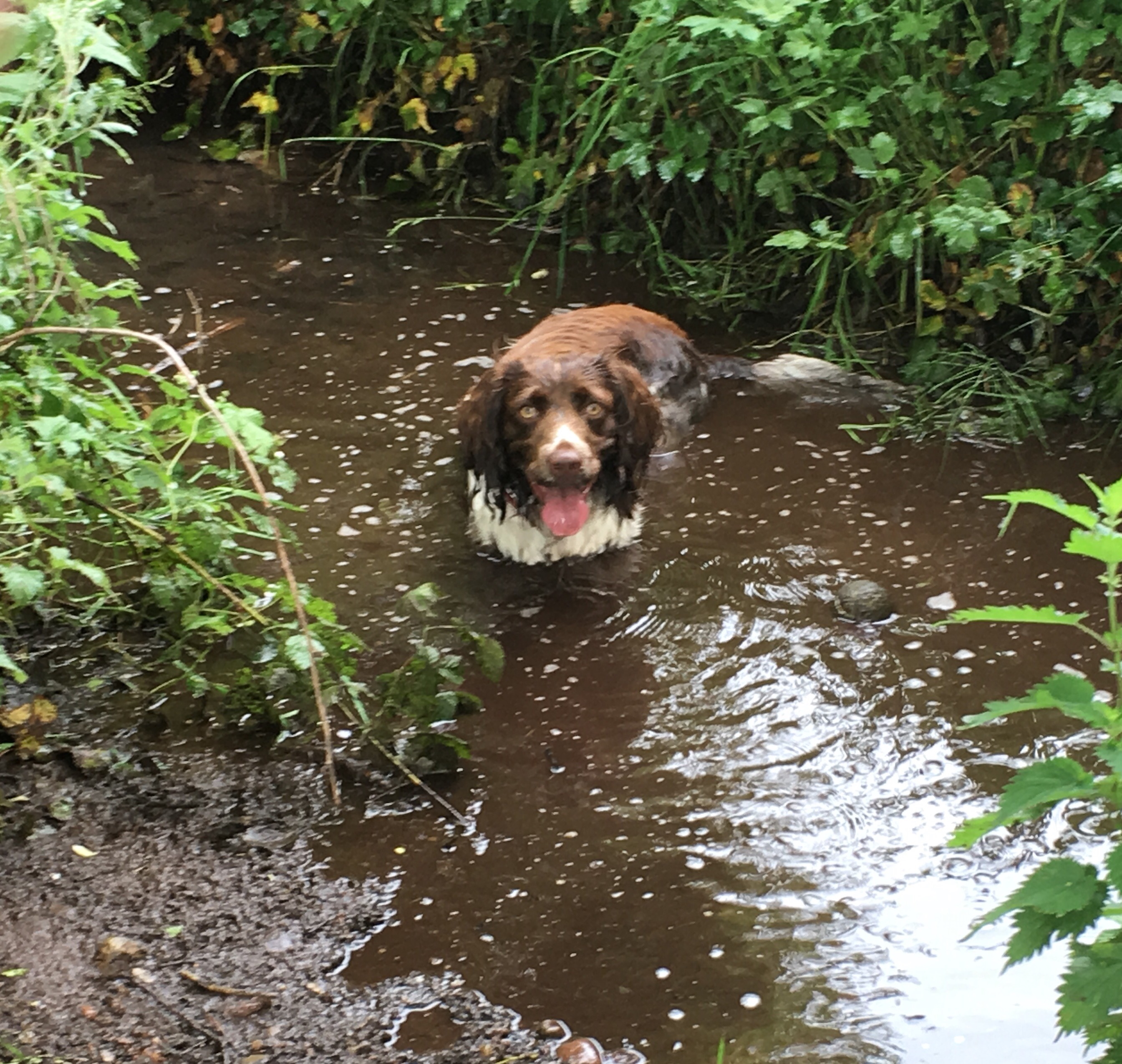 I’ll be honest. Frankie was a panic buy. Ian had whisked me to New York and arranged a Billy Joel concert on my actual 40th birthday so this is what I had to try and at least emulate when the day of his special birthday came around.

A weekend abroad was too obvious. Some sort of Liverpool FC related present was out of the question (I’m a blue nose as he affectionately calls me). But he’s always wanted a dog. Since childhood, him and his sister had pleaded, begged, beseeched, implored and prayed for a dog. Their dad got them a budgie. Needless to say they stopped asking.

Twenty years down the line, Ian started to repeat the same with me. So I gave him Sam. He had to take him for walks. He had to retrieve foreign objects from his mouth. He had to dispose of his shit in little bags. What was so different?

But Sam wasn’t enough obviously. And the arrival of Joel made Ian more determined to acquire a faithful companion so he could have a cast iron excuse to escape the house from this feral entity twice a day. But he had to wait because I wasn’t done breeding and when I’d finally house trained three kids, the last thing I wanted was to start again with a non verbal beast.

But a panic buy he was and so Frankie the Springer Spaniel entered our lives.

To say we were unprepared was an understatement. After a three hour drive from Manchester, Frankie padded into our house, walked into the kitchen and proceeded to poo under the table. This traumatised Joel and he refused to have anything to do with him for the next few months.

And so began raising our fourth baby. The baby gate was reinstated. Chewable toys were purchased. And instead of nappies, read puppy pads. They were strewn across every room in the house, as if I’d lost leave of my senses and decided to furnish downstairs with absorbent, padded white carpets like some sort of lunatic asylum. And Frankie was so clever (or crazy) because he managed to find every small space of non protected carpet and urinate and defecate there. Apparently, puppy pads were for chewing and shaking violently in his mouth as if he’d managed to catch a small wild animal (that would come later). Our Easter holidays of that year were ruined, because I spent the whole time following this cute, excrement-producing machine round the house, treat ready in hand in case he finally twigged what puppy pads were actually for. I’m not sure he actually ever did and it was then we realised our Frankie was broken.

As faithful companions, dogs across the land are always beyond excited when their owners return home, having abandoned them for the eternity of the ten minutes it takes to do the school run. On hearing the car engine, they charge to the door, tails wagging and the rest of their body suffering from some sort of spasm as they will their master to open the door. Not ours. He does it in reverse. He’ll run to the back door, do his little spine bending, tail rotating routine, then as soon as he hears footsteps approaching, he runs into a room and hides. Hides!!! No jumping up, no over enthusiastic licking, no excited barking. No. We have to seek him out to check he hasn’t acquired some Harry Houdini escapism skills and took himself to the park. So that is another reason why Frankie is broken.

So like I said, a dog is meant to be a faithful companion, always by your side, ready to protect you in case of ambush. However, walks with Frankie are a solitary affair. Once at the destination, he practically walks himself. He looks like the Littlest Hobo, while we look strangely suspicious, walking with a handful of poo bags and a ball, but no visible dog. He has improved slightly in that he stays within a reasonable distance, still in sight if you possess a 24x telescope. When he was younger though, he would go AWOL for most of the walk. While you frantically scurried round forests, calling his name (it took a great deal of willpower not to be screaming F#@cking Frankie at this point), he was having the time of his life. New smells. Undiscovered muddy puddles. Small, wild animals to torment. And when he’d had enough, he would saunter back to the car and await your arrival. In the meantime, you’re imagining having to tell the kids you’ve lost the dog, the dog they spend at least five minutes a day acknowledging. And when you see him sitting there next to the car, like some obedient canine, you have to fight every bone in your body not to kill the mutt. Luckily, utter relief is the overriding emotion and you end up rushing over, cuddling him, therefore reassuring him that it is ok to run off and walk himself! Another reason why Frankie is broken.

As a Springer Spaniel, it is in Frankie’s DNA to retrieve objects. Instead of dead animals, read balls, sticks and stones. And by retrieve, I mean fetch object back to owner and place in hand. Not Frankie. He will indeed spend all day chasing that ball, eager to please, running back proudly with hunted object in mouth, ready to retrieve it all over again after it is thrown. But something Frankie has never managed to learn is that the item should returned directly to the owner. So that the owner can play the game again. Not Frankie. We have to retrieve the ball. Sadistically, he will place the dead piece of illuminous rubber far from our reach then start barking wildly for the game to begin again. Every time, we have to stop ourselves in full stride and usually turn volte face to hunt out the ball. There have been numerous times when he’s forgotten where he’s placed his ‘prey’ but will still bark furiously at us to throw his ball even through we don’t know where the fecker is! He seems to think we are magicians and all the gesticulating and hurling of profanities at him is actually part of our magic act and a ball will suddenly appear in out hands! Ta da!! Another reason why Frankie is broken.

But for every reason he is broken, there is equally a reason why we love him. We love how he invades our personal space. We love how he sneezes in our faces. We love how he breaks wind then immediately leaves the room. We love how he wipes his mouth on the sofa and carpet after eating raw meat. We love how he wakes up the entire neighbourhood barking at a leaf being blown around by the wind. We love how he bounds back to our side in a vast, open field and sprays us with dirty, river water. Ok. I am struggling here! All I know is we do love him and we can’t remember our lives before him or imagine our lives without him. Our crazy Frankie Stevenson – basically the dog version of Joel!

Tanned hands means dance shows are back! They haven’t changed much since I wrote about the first one up there ⬆️
#teacher #teachersfollowteachers #teachersofinstagram #teachergram #teacherlife #teachertribe
#honesty #honestyisthebestpolicy #honestyissuchalonelyword #christmas #housewifeproblems