Camping? It’ll be fun, they said.

Yesterday, we had a lovely day by Cumbrian standards. Sun showed its face and actually decided to hang around for most of the day, instead of skulking back indoors like a moody teenager. It also fetched its shy friend, Warmth, and for the first time in ages ( basically that one day back in August), the washing actually came back in slighter drier than when it left the house. This ‘warm’ weather, typically, unleashed a predictable series of events seen all around those parts of Britain for whom pleasant weather is a rare delicacy.

Firstly, the constant, monotonous, toneless sound of lawnmowers appeared from every direction. You could almost hear the collective groan of every man in the neighbourhood as he painfully accepted that grass cutting season was upon us once more. They were like a tag team; as soon as one finished, the glorious silence was interrupted once more as another petrol mower spluttered into life, and so this continued beyond sunset, as some of my neighbours see cutting the grass as a nocturnal activity.

Secondly, accompanying these happiness-sapping machines were male, British legs. Everywhere. Stalks or tree trunks of white. It’s an unwritten rule amongst the male race that 5 minutes of sunshine and the temperature gauge reading above 10 degrees Celsius equates to the wearing of shorts. Women, on the other hand, have the decency to wait for a full leg wax and spray tan before they reveal their pins to the nation. So, at the moment, my senses of sight and hearing are not particularly happy!

Thirdly, as I type this, my feet are soaking in a washing bowl of warm water. Because if this weather lasts beyond Saturday, I may have to reveal my feet. And that is not a pretty sight. So I first have to sit here, shouting at the dog to retrieve his ball from my tub of water because we’re not on bloody St Bees beach, and wait. Wait for a miracle. The miracle being that this now tepid water and fresh piece of industrial strength sandpaper will rid my feet of the dry skin which arrived 10 years ago and has never shown any intention of leaving.

So all over the country, we are getting our gardens and bodies ‘summer ready’. But two days of consecutive happiness inducing sunshine then bring about the inevitable conversation. When shall we go camping?

Camping is like childbirth. Women will understand this comment. For men, let me explain. After every pile-inducing, perineum- tearing, excruciatingly painful delivery, we vow we’ll never do it again. Yet, within six weeks, we’re talking about a sibling for the sleep-depriving, vomit-loving, wee-soaking baby in our arms. Which pretty much describes a camping experience. You don’t sleep. You have neighbours (usually Scousers) screaming for their lost children at 2am in the morning (why they’ve only just noticed that their child is missing at this hour beggars belief and imagine our annoyance 5 minutes later, when little Devon is found, curled up fast asleep in his sleeping bag, probably pissed out of his head on Echo Falls fruity rosé to try and escape from the experience which is camping with his drunk and neglectful parents). Vomit inducing because, like Devon, you need to drink to try and raise your body temperature to anything above 36 degrees, to forget why you agreed to this and to overlook how long you’ve agreed to do this, therefore making the possibility of having to empty the contents of your alcohol laden stomach pretty much guaranteed. And wee soaked, because, you’ve summoned enough bravery (or have forgotten the Tena ladies) to use the “facilities” which entails wading through 56 other urine samples collected on the floor of the portaloo before adding them to your posterior as you lower your rear end, eyes shut, face grimaced, onto the toilet seat.

Unfortunately, you don’t have these memories to make you question your decision to go camping for the very first time. Everything seems like a good idea the first time. So there came the time when we decided to rid ourselves of our camping virginity.

We were invited with the football team to camp at a local tournament one weekend in July and thought it would be a good idea. Firstly, it would be cheap. As I was working as little as possible and had been for the last six years, since I was permanently in a state of being pregnant, having just given birth or ready to try and get pregnant again to avoid returning to work, money was tight. Secondly, the campsite was within a reasonable driving distance so we would survive without toilet stops, stops to change the DVD, stops for Joel to go to the toilet because he hadn’t needed to ten minutes before and stops to check we hadn’t forgotten something vitally important. Like baby Abigail. Thirdly, it was in July so we had every chance of catching those two weeks of Summer we were now designated annually by good old climate change.

Firstly, it wasn’t cheap. We had no equipment whatsoever, so basically ended up spending a fortune to live like tramps. Even though we are a family of Oompa Loompas, we felt we had to purchase a tent with enough headroom for a 7 foot tall basketball player and enough bedrooms so we could successfully avoid each other for the entire weekend we were away as a ‘family’. Secondly, the campsite was localish but in Haverigg, basically on a rugby pitch a stones throw from one of Her Majesty’s prisons. And thirdly, we chose the wrong two weeks of summer.

The experience did start positively. The sun was indeed shining on the evening we all arrived, clean and refreshed. There was a strong sense of camaraderie as the men pitched the tents and the little women folk sorted out the children: “No you can’t get the internet here! Go to the bloody playground which is out of my eye shot and take your sister with you!”

Once Abigail has been returned to us by a complete stranger after being abandoned by her brothers (was she missing or temporarily misplaced?), we settled to freshly prepared food (aka burnt barbecued meat), gathered round the campfire (dressed ourselves in every piece of clothing we’d fetched and moaned continuously about how fecking cold it was) and enjoyed an alcoholic tipple (downed every drink in a 10 cm radius to forget where we were, who we were with and how fecking cold it was). So all in all, it was going well. 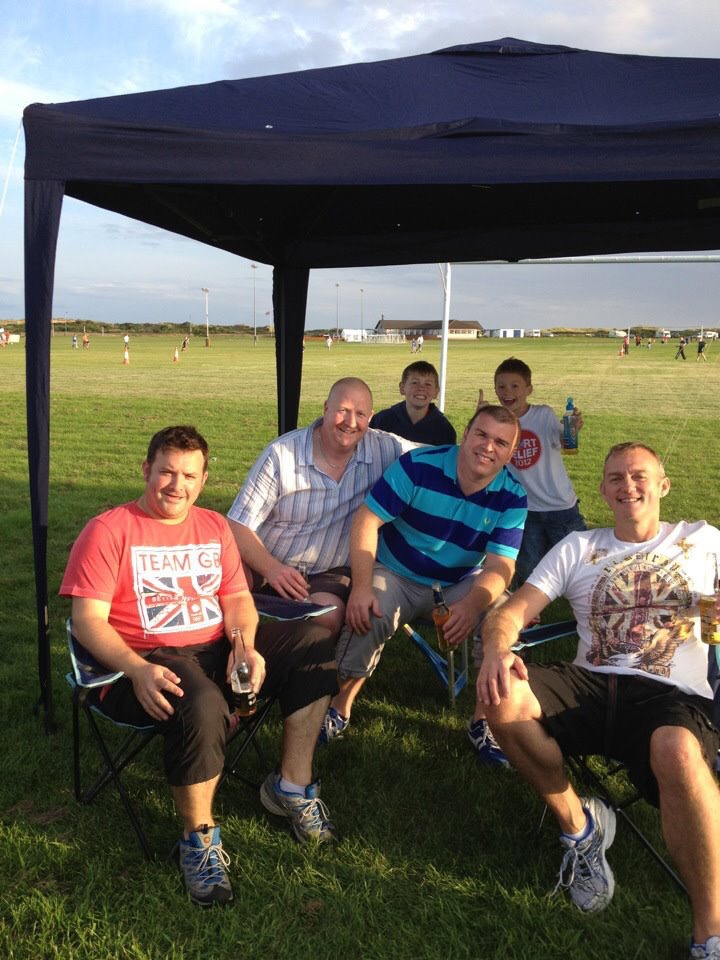 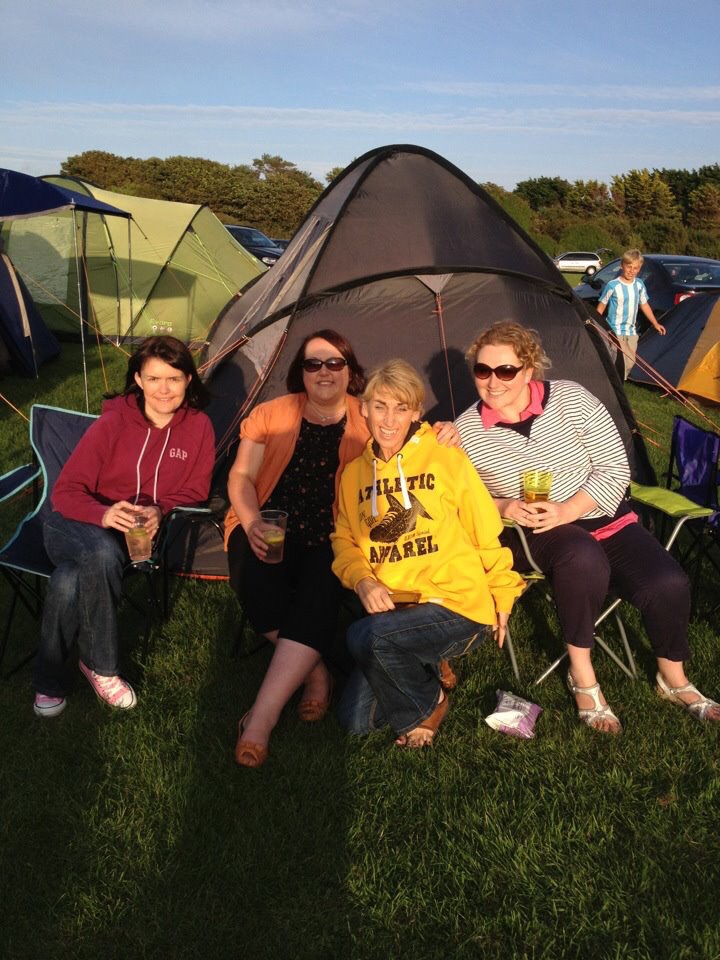 Until it rained. And rained. And rained. And a force nine gale arrived from Kansas. Obviously children sleep through it, but when that first drop of water hits the canvas, adults everywhere awake instantly as if they had been electrocuted. Then begins the constant worry as to whether your Millets panic buy will survive the deluge. If the noise of rain doesn’t keep you awake, it will be the angry muttering of every other camper around you. “Why did we agree to this!” “Oh I bloody hate camping”. All the men get up as if they’re on first shift at Sellafield to survey the collateral damage. The communal gazebo had decided it had had enough; it had escaped its moorings and decided to fly off to Oz with Dorothy’s house. Evidently, inanimate objects have a hatred for camping too. As for me, I wasn’t particularly enjoying my camping experience but I had a get out clause. One of the very few perks of having a daughter who dances. She couldn’t possibly miss her dance lesson with her medal exams being so close. So, once daylight broke, off Abigail and I escaped, five hours earlier than we needed to, driving straight home for a warm shower and decent cup of tea while everyone battled the elements and Ian attempted to coach a football team in the tournament. We’ve often said that the football spoiled this weekend as we had to pretend to 1) be interested while still cold, wet and miserable from the night before and 2) be sober enough to be in charge of minors.

So I left them to it, the anger from their eyes burning into my back. They still didn’t look too happy with me when I returned, freshly showered, rested and sated. Sun had made an appearance during the day but hadn’t fetched Warmth so everything was wet; grass, tents, chairs, clothes, food. Noah could have built his second ark and filled it with pairs of miserable kids and disgruntled parents. We attempted to repeat the campfire experience of the previous evening but the camaraderie had dwindled, the excitement had lessened and it was still fecking cold. The weather showed no originality and repeated the downpour of the previous evening. By morning, nobody was really talking. We walked round like zombies, attempting to pack our equipment in such a way that it may be used again but hating with a passion every piece that we loaded into the car. At this point, I played the “having a toddler daughter” card again (I actually think she was about 5 but I easily got away with it). Daddy’s little princess was suffering so before Ian could say, “Why don’t you just put the kids in the car and….”, I was at Egremont and home was minutes away!

And that was our first camping adventure. I can’t really count it as a full experience as I opted out for quite a few hours and chose to terminate it early!

So a friend mentioned going to an outside cinema event for my birthday. Cracking idea. As my special day is in August, we can be optimistic about the weather. Or at least be fully prepared for all four seasons making an appearance in one evening. Sitting on a picnic rug, sipping whatever alcohol beverage I’m not allergic to that week, watching The Greatest Showman sounds like a refreshing, civilised way to celebrate my 45th year. (Or is it technically my 46th?) And the fact that it’s Joel’s birthday the following day and we’ll be leaving for a family holiday after lunch will not be a problem because once the film is over, we’ll be chauffeured home by the designated driver to jump into our warm, soft, clean beds. Oh but we can camp? Can we? This was news to me! But it makes sense. We can all drink then just saunter back to the tent, have a few more drinks, then retire for the night for a blissful night sleep. There’s a nagging doubt at the back of my brain though. Should I? There’s something telling me not to reply immediately to this text. I need the Pensieve from Harry Potter to delve into my memories and find out what it is that is troubling me. But I know it’s a lost cause because I walk into a room most days and forget why I’m there! So I send the reply “Ooh that sounds great!” Then excitedly shout up the stairs, “Ian, have we still got the tent?! I’m going camping!!”